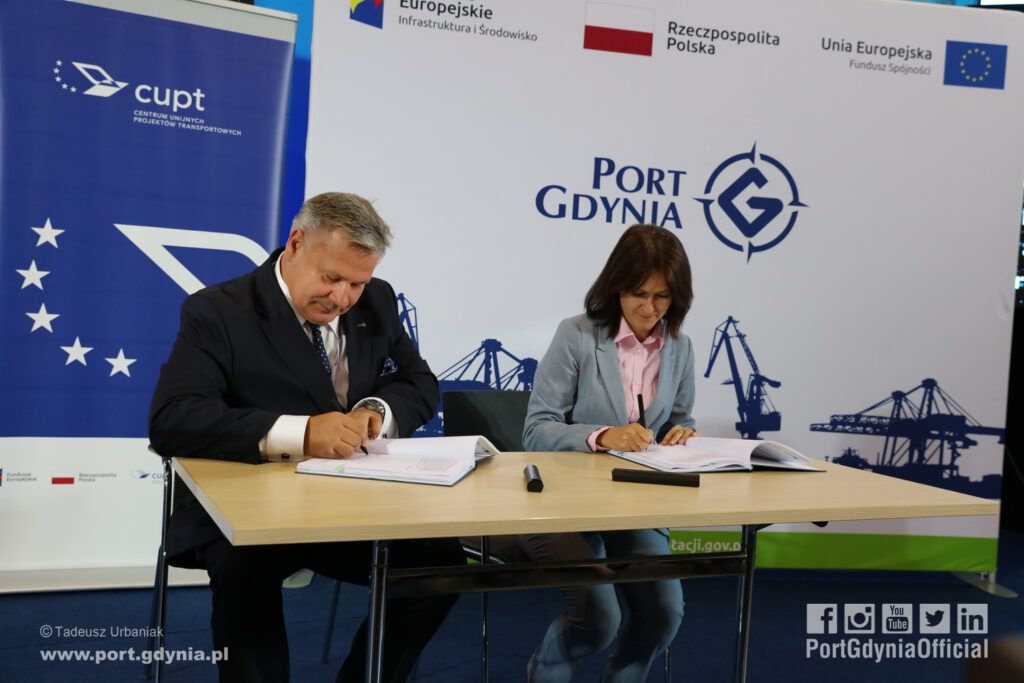 The aim of the investment is to electrify the siding of the Intermodal Rail Terminal from the side of the land, as a result of which traffic control will be fully automated.

On Monday 9 September, at the Baltexpo Exhibition in Gdansk, the Centre for EU Transport Projects signed a contract with the Port of Gdynia for EU co-financing of the project called “Development of rail access to the western part of the Port of Gdynia – reconstruction and electrification”. Total expected cost of the investment will be nearly 70 million PLN, out of which nearly 20 million will come from EU sources.

”Polish ports keep breaking records in recent years. Last year we exceeded 100 million tons of cargo handling. Despite great results, investments are needed to rise competitiveness. What we need to go off to the deep is efficient railway to take and bring cargo. This is why the modernization of road and rail access, the so-called „last mile” to sea ports is a priority for both us and the EU,” – said Deputy Minister of Investment and Development, Grzegorz Puda.

The project objective is electrification of the railway siding of the Intermodal Rail Terminal, its reconstruction, construction of a new track and turnouts on the inbound-outbound group, as well as installing a new Rail Traffic Control system (RTC). The investment includes electrification of a 2.5-kilometer section of the railway and construction and modernization works on 12 turnouts: four new will be built and eight will be rebulit after dismantling, using new turnout sleepers.

“The statistics for intermodal transport continue to grow systematically. In 2018 more than 17 million tons of intermodal cargo were transported, which is an increase by 15.6% as compared to previous year. The agreement signed today is already the 33rd, and the amount of co-financing with EU funds within the Operational Programme Infrastructure and Environment 2014-2020, Measure 3.2 „Development of maritime transport, inland waterways and multimodal connections”, will exceed 1.23 billion PLN,” underlined Joanna Lech, acting as CEO of the Centre for EU Transport Projects.

“Polish ports are one of the best examples of successful economic transformation in our country. Thanks to the dynamic development and relevant investments, the growth of cargo handling at main Polish ports grew in the last decade twice. Please remember that this success would not be possible without Poland’s membership in the EU, common European market and EU cohesion policy supporting large infrastructural investments. This is why the EU supports and will support development of ports such as Gdynia and the transport infrastructure around it,” – said Rafał Szyndlauer, Political and Legal Advisor in the European Commission.

By electrifying rail access, the functioning of intermodal Container Terminal from the side of the land will improve. As a result of the project, there will be no need to switch tractions from electric to diesel, and traffic control will be automated.

The modernization is planned to end in January 2021.