The planned investment project involving construction and reconstruction of road and rail infrastructure in the eastern part of the Port of Gdynia is located along the 4th Dock, in the north part of the City Centre (Śródmieście) of Gdynia. The project is being implemented in the area of Polska St., the Marine Station and the second zone of Polish Quay.

The investment has modernised the connection between the East Port and the international transportation system via A1 Motorway, by using the following layout of streets and routes: Polska St. – Janka Wiśniewskiego St. – Kwiatkowski Route – Tri-City Bypass – A1 Motorway.

The project “Infrastructure of road and rail access to the eastern part of the Port of Gdynia” consists of two stages:

Scope of the project

The subject of the completed Phase I, in which construction works were accepted on 29 December 2009, included the following tasks:

The following tasks remain to be carried out under Phase II: 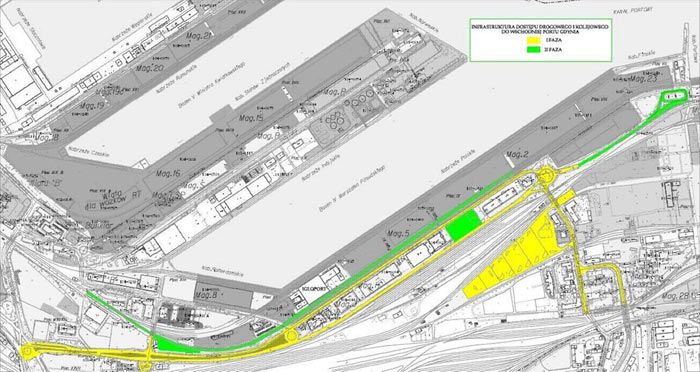 The implementation of the project is in line with a series of strategic documents and objectives set therein, at Community, national, regional and local levels.

One of the objectives of the common European transport policy is to remove barriers in all transport sectors, meaning to ensure inexpensive and efficient development of transport as a branch of the national economy to co-create the conditions for the economic growth of the city and the region. In accordance with the transport policy of the European Union, the transport development should ensure competitiveness of the economy and a free movement of goods and persons.

The objective of the project is to fill all the gaps in the infrastructure of road and rail access. This will be accomplished through:

At this point, we can also indicate objectives in the socio-economic context – as qualitative (non-measurable) and quantitative (measurable) objectives of the project.

The investment is also directly linked to the Motorways of the Sea and Short Sea Shipping programme. It was recognised as a priority in the INTERREG III programme, where it received funding for the initial concept and feasibility study (SEBTrans-Link Project, 2005).

The result of the project are port infrastructure elements with the following parameters:

According to the original detailed schedule of construction works, the planned works in Phase I of the project were to be completed by June 2010, and then the construction work under Phase II were supposed to begin. However, the works were completed much earlier, in December 2009.

On 29 December 2009, acceptance was carried out for the completed Phase I of the investment. So far, Polska Street has been expanded by the second dual carriageway, located behind the warehouses of the second zone of Polish Quay. Four intersections have been reconstructed, and the construction of an external parking lot for trucks at Chrzanowskiego Street has been completed. The parking lot, which can accommodate 125 trucks, was put into operation in May 2009. A parking lot for cars was also made – at Polska St. In July 2010 a building permit was obtained for Phase II of the investment. Construction works started in December 2011. The late start of works was caused by the Conservator-Restorer questioning the demolition of buildings at 9 and 13 Polska Street. In November 2011, PGA SA received a decision on changing the scope of the building permit, and only then it could start the construction.

In 2013 the construction works are being carried out. At the same time, the works related to the supplementation and care of green areas along Polska St. will be done. Information and promotion activities are planned for Q4 this year.

The dates for operations, preparation of documents and obtaining decisions