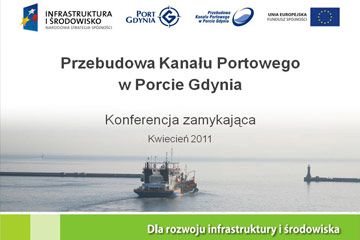 The Port of Gdynia Authority S.A. finished the investment named “Reconstruction of the Port Channel in the Port of Gdynia” on 31st March 2011 – in accordance with the agreement (signed in Warsaw on 30th of November) on its co-financing by the European Union in the amount of PLN 53 726 362.96 coming from the Cohesion Fund within the framework of the Operational Programme Infrastructure and Environment.

The conference closing the realization of the project named “Reconstruction of the Port Channel in the Port of Gdynia” that was co-financed by the European Union from the Cohesion Fund within the framework of the Operational Programme Infrastructure and Environmentwas held on 8th April, 2011 between 11:00am and 5:00pm on the deck of the “Stena Baltica” ferry in Gdynia. During the meeting the guests took a short cruise on the Port Channel and the Bay of Gdansk to take a look at the area of the completed investment, that is the Port Channel, the strengthened quays and the Pilot Groyne (Ostroga Pilotowa).
The main aim of the project was to increase the acceptable draught of vessels and to improve the navigational conditions at the Port of Gdynia. The following works have been carried out as part of this investment: the dredging works at the Port Channel, the harbour turn basins were dredged and their diameter enlarged, six quays were rebuilt, the bottom of the sea at the quays was deepened and the Head of the Pilot Groyne was rebuilt.
Rebuilding of the Port Channel consisting in its deepening to the aimed depth of -13.5m shall allow handling the vessels with the total draught of up to 13m at the Dutch quay and up to 12.7m at the Hel l quay. The depth at the French, Norwegian and Slovak quays was also increased. Further plans of the port development include building and rebuilding the next quays that would allow utilization of the attained depth of -13.5 m.
The rebuilding of the Pilot Groyne construction widened the internal entry to the port which is 98 m at the moment and its maximum depth is -13.5 m, allowing safer manoeuvres of the wider vessels.
As a result of the accomplishment of the investment the diameters of the port’s turning basins have also been deepened and enlarged.  The safety standard of manoeuvres has been increased and there is a possibility to handle larger vessels – with the draught of up to 13 m and length of about 200m on the Turn basin No. 2, and of the length of about 250m on the Turn basin No. 3.
The accomplished investment relating to the Reconstruction of the Port Channel is the successive stage of development of the Port of Gdynia and it is one of the first completed projects that initiated the new era for the Port of Gdynia – the new mode of operation on the port services market based on innovation and supporting the development of the region. The accomplishment of the investment  named “Reconstruction of the Port Channel in the Port of Gdynia” was essential in view of the commencement of works on other investments that will be successively implemented according to the “Port of Gdynia Development Strategy until the 2015”.